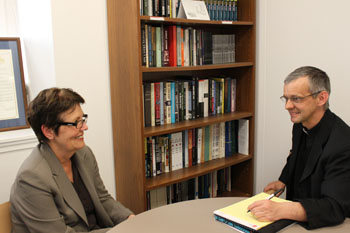 Rev. Michael Carson, Pastor of Queen of Apostles Church in the Diocese of San Jose and member of the State Board of California People of Faith Working Against the Death Penalty, recently interviewed Jeanne Woodford, executive director of Death Penalty Focus (DPF). DPF is the largest organization working to abolish the death penalty in California.

Woodford previously served as the Undersecretary and Director of the California Department of Corrections and Rehabilitation and Warden of San Quentin State Prison, where she oversaw four executions. Her journey from one responsible for executions at San Quentin State Prison to running one of the largest death penalty abolition organizations in the Country is a remarkable one. Recently I had a chance to talk to her about this issue and about her work to end the death penalty in California.

Question. In what ways has your Roman Catholic faith background influenced you on the stance you have taken on the death penalty?

Answer. My Roman Catholic upbringing had great influence on my thinking about the death penalty. I was taught to have respect for God’s creation.

Answer. I have always been morally against the death penalty but I was not passionate about my position. In 1978, I started working at San Quentin as a Correctional Officer. At the time, San Quentin only had a few people on death row. I watched death row grow to where it is today, 725 people condemned to death. I feel like I grew up with the death penalty. I have seen it from all points of view. I know how costly and ineffective the death penalty is. We have spent 4 billion dollars on the death penalty since 1978 and have carried out 13 executions.

I carried out 4 executions. At the end of every execution a member of my staff would ask, “Is the world safer because of what we did tonight?” We knew the answer was no.

The study of criminal justice is a science and we know from our study of this science that the best way to prevent crime is to solve it. We must spend our criminal justice dollars on policies that truly make our communities, our neighborhoods and our children safer.

Question. What would you say to victims’ family members of violent crime who support the death penalty?

Answer. I would never presume that I have the right to tell the victim’s family member how to think about the death penalty. They have experienced unspeakable tragedy that no person should have to go through. I listen to the family members. The SAFE California campaign, which will replace the death penalty with life in prison without the possibility of parole, has many vocal supporters who have suffered terrible losses.

One of the reasons they support SAFE California is that they see it gives aid to victims and demands accountability from the guilty. Currently, death row inmates are not allowed to work in prison. With SAFE California, inmates will be sentenced to life without possibility of parole, a punishment which requires work in prison and payment to the Victim Compensation Fund.

Over 700 victim family members belong to California Crime Victims for Alternatives to the Death Penalty. Many of these members initially thought they wanted the death penalty for the person who committed the crime against their loved one but later came to realize that it was a hollow promise. The years of appeals, the years of trials and retrials, autopsy photos, re-enactments, and the attention the individual who committed the crime received in the media at every phase was not worth a sentence of death which is rarely carried out. Others came to realize that the quest for retribution harmed them even more and decided that the most important outcome was for the person who harmed their love one to be held accountable with an appropriate sentence that would bring legal finality and allow the family to begin the healing process.

Question. What reaction have you received from your colleagues in the California Department of Corrections and Rehabilitation from your advocacy work on this issue?

Question. When the death penalty is removed from California, how would you like to see the savings spent?

Answer. One really important part of the SAFE California initiative is that it sets up the SAFE California Fund — a $30 million a year infusion of funds for law enforcement to focus on open rape and murder cases. Many people don’t realize that nearly half of all murders in California go unsolved in an average year, or that a little more than half of reported rapes also remain open. We need to take action and it’s worth noting that there are more unsolved rape and murder cases in majority Africa-American and Latino neighborhoods. That’s just not right. All victims deserve justice. So I’m very proud to be a proponent for the SAFE California Act because I believe that the DNA analysis, fingerprint testing, and witness relocation tools the SAFE CA Fund will cover will make a real difference for our families and our personal safety.

When the death penalty is replaced with a sentence of life without possibility of parole, a portion of the money saved will go into the SAFE California Fund for solving the 46 percent of homicides and the 56 percent of reported rapes that go unsolved each year across our state. Also, by sentencing inmates to life in prison without the possibility of parole, inmates will be required to work and pay money to the victim compensation fund, which provides services to victims. Services like counseling and even financial assistance to defray funeral costs are provided to victims of trauma. The remainder of the money will go into the general fund to improve California’s budget, hopefully saving programs that prevent crime such as education, violence prevention programs, and services to crime victims.

Question. Why should Roman Catholics be concerned about this issue?

Answer. As recently as November 2011, Pope Benedict XVI expressed his support for current efforts underway that would eliminate the death penalty, because it is against Catholic teachings. The Catholic Bishops of California also endorsed the SAFE California campaign to replace the death penalty. In a statement they said that: “Justice requires proportionate and effective means in the protection of society. As citizens, we find the use of the death penalty unnecessary, impractical and expensive.” I am in total agreement. Roman Catholics are also affected by the death penalty in ways that they might not be aware of. Law enforcement budgets are being cut and we do not have the resources to keep our communities safe. The death penalty costs an average of $184 million more per year than life in prison without the possibility of parole, and yet it continues to be an ineffective system that we fund instead of our schools and enrichment programs.

Catholics also understand the very grave risk of executing an innocent person. To date, 140 people have been freed from death rows across the country. Even in a system as good as ours, mistakes happen. With the death penalty, there’s no correcting those mistakes.

Question. How would you advise Roman Catholics to get involved on this issue?

Answer. Roman Catholics everywhere can get involved in this issue by raising awareness and holding educational events to inform the public about the death penalty. In California, Roman Catholics can get their church to formally endorse the SAFE California Campaign, they can hold educational events, and become volunteers for the campaign. For more information on how to get involved, visit www.safecalifornia.org.