Attorney David Dow has made a career out of defending death row inmates in Texas — a state that boasts the highest number of death row executions nation-wide since 1976.

In the last twenty years, Dow has defended over 100 inmates sentenced to death. Many of his clients have died — most of them were guilty — but Dow says they should have been sentenced to life in prison instead of death at the hands of the state.

“The person that we’re executing is simply not the same person who committed the crime that landed that person on death row in the first place,” Dow tells Terry Gross.

Dow’s new book, The Autobiography of an Execution, is in part an exploration of the politics behind the death penalty and an argument for its abolition. It’s also a memoir; Dow delves into how this line of work has affected his family life.

David Dow is the litigation director at the Texas Defender Service and teaches law at the University of Houston Law Center.

This campaign has the objective of reaching 1000 congregations throughout the state to commit to engage in dialogue, discernment, education and prayer on the death penalty.

The 1000 Congregations Campaign is a coalition project of California People of Faith Working Against the Death Penalty, Progressive Jewish Alliance and Death Penalty Focus. When a congregation registers for the campaign they will be provided with a selection of resources such as Films and Discussion Guides, List of Guest Speakers, Reading Materials, Liturgical Resources, Educational Brochures etc.

For more information on the campaign go to www.deathpenalty.org/1000congregations

A CD is available of Vicki Schieber speaking about the murder and rape of her daughter Shannon and her opposition to the death penalty.

Eliminating capital punishment, which is rarely carried out anyhow, would save the state $125 million a year.

There are many reasons why people object to the death penalty. Opponents point to the ever-present risk of wrongful conviction. They note that there’s bias against people of color and low-income defendants, as well as geographic disproportionality in its administration. And there’s the fact that most other civilized societies around the world have concluded that it should be abolished.

But these days, there’s also a strong economic argument for doing away with capital punishment. With California facing its most severe fiscal crisis in recent memory — with draconian cuts about to be imposed from Sacramento that will affect every resident of the state — it would be crazy not to consider the fact that it will add as much as $1 billion over the next five years simply to keep the death penalty on the books.

Today, California has 678 offenders on death row, more than any other state. Yet, in the last 30 years, we’ve had only 13 executions. With 20 more people sentenced to death each year — and an average wait of 25 years from sentencing to execution — the number of inmates on death row is continuing to climb.

Now consider what capital punishment costs. According to the final report of the California Commission on the Fair Administration of Justice, which I chaired from 2006 to 2008, the cost of a murder trial goes up by about half a million dollars if prosecutors seek the death penalty. Confinement on death row (with all the attendant security requirements) adds $90,000 per inmate per year to the normal cost of incarceration. Appeals and habeas corpus proceedings add tens of thousands more. In all, it costs $125 million a year more to prosecute and defend death penalty cases and to keep inmates on death row than it would simply to put all those people in prison for life without parole.

On top of that $125-million extra cost per year, California is also facing the need to build a new death house for death penalty inmates at an estimated cost of $400 million.

The commission, whose members were evenly divided between opponents and proponents of the death penalty, agreed that the present system is, as state Supreme Court Chief Justice Ronald M. George has said, “dysfunctional,” and it unanimously recommended a series of steps to rectify the most serious flaws in the system. We recommended increased staffing in a number of areas, including a 33% increase in the staff of California state public defenders to handle direct appeals and a 500% increase in the California Habeas Corpus Resources Center to take on habeas corpus filings at a much earlier time than is now the case. We also called for a commensurate increase in the staffing of the attorney general’s office to handle the increased caseload.

These staffing increases would cost $95 million more per year. They would bring the time needed to administer California’s death penalty down to about 12 1/2 years, near the national average.

Our report was issued almost a year ago, on June 30, 2008. Since that time, there has been no movement in Sacramento to seek implementation of our proposed reforms. They appear to be in quicksand. And with the fiscal crisis confronting the state, they look to be locked in granite.

So let me make another recommendation. I think it’s time to do away with the death penalty in California.

The system simply isn’t working. No one is being executed; there’s been a moratorium on executions for three years because of legal challenges. Yet death penalty cases are being prosecuted at great expense. We have a lengthy appeals process, death house overcrowding as offenders pile up and millions of dollars being wasted on a system that does not do what it is supposed to do.

It’s time to convert the sentences of those now on death row to life without parole. Doing so would incapacitate some of the worst of the worst for their natural lives, and at the same time ensure that a person wrongfully convicted will not be executed. And it would save $125 million each year.

A courageous governor facing an unprecedented budget crisis would take this step and use the taxpayer money saved to preserve some of the vital services now on the chopping block. 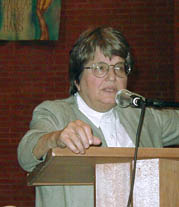 This short PowerPoint slideshow is fully narrated with music, photos, statistics and graphs to present the current debate on key issues affecting the death penalty. There is a special section on religious perspectives. It is perfect for a group presentation followed by discussion.

You need Adobe Reader to download some of the document below. You can download it for free.

The Statement of Conscience is an interfaith declaration of opposition to the death penalty and commitment to work in solidarity for its abolition in California. It was presented in 1998 at Grace Episcopal Cathedral in San Francisco.

The Declaration of Life affirms life and opposes the death penalty should you or your loved ones fall victim to murder.